As recently as the late-1800s, people had no idea how horses ran. To the general public’s astonishment, Eadweard Muybridge revealed that at a point during a single “revolution,” all of a horse’s four legs hover over the ground.

This was demonstrated through stop-motion photography, which has been animated here. Muybridge made an animated projection of the idea afterwards, possibly influencing Edison’s invention of the precursor to the motion picture camera.

3 thoughts on “On the Radar: The First Animation Showing a Horse “Hovers” During Its Run” 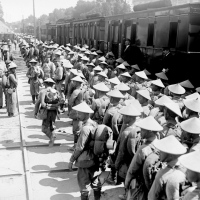